B3LAB, Cloud Computing and Big Data Research Laboratory is an affiliate of the Informatics and Information Security Advanced Technologies Research Center of the Scientific and Technological Research Council of Turkey.

B3LAB, the Cloud Computing and Big Data Research Laboratory, is playing a key role in the formation of Turkey's artificial intelligence strategy to be announced by the end of the year

More than 20 countries around the world have announced their national artificial intelligence (AI) strategies, drawing their road maps with different schools and perspectives on how to use this key technology. They have made plans about how to improve their national defense and public infrastructures with this new technology, how the export share in the private sector should contribute to the economy, and how the education system will be restructured with the foresight that jobs and professions will transform. Meanwhile, Turkey is in the process of maturing its AI strategy.

Ali Taha Koç, head of the Presidential Office for Digital Transformation, known as the maestro of these studies, announced that the strategy would be disclosed by the end of the year. Stating that Turkey is aware of global technological growth in the world, Koç recalled that each unit of growth in information and communication technologies contributed 1.8-2% to the economy. He emphasized that further investment should be made in technology, and AI in particular.

So far, no detailed explanation has been made in accordance with which approaches and priorities Turkey's national AI strategy will be determined. However, my visit to the Scientific and Technological Research Council of Turkey (TÜBİTAK) Information Security Advanced Technologies Research Center's (BİLGEM) Cloud Computing and Big Data Research Laboratory (B3LAB), which will be the backbone of our country's AI strategy, provides clues to the fundamental aspects of this strategy.

B3LAB, an affiliate of TÜBİTAK BİLGEM's Institute of Information Technologies, is the research and development (R&D) laboratory in charge of cloud, big data and AI pillars of homeland security. This is a young and five-year-old laboratory that aims for the highest level of protection of public institutions, especially defense industry institutions, with national software and the highest level of protection of data confidentiality. The B3LAB team is composed of zealous experts who aim to produce unique national projects in parallel with technological developments around the world.

Since its inception, B3LAB has developed related products under the name Safir. These products are currently embedded in in-house systems in certain public institutions. The long-term goal is to spread these products among the public through the e-government, thus raising a common understanding in the public sphere about the protection of personal data, and then expanding the public benefit area of TÜBİTAK by enabling the transfer of the products developed by B3LAB to the private sector as well.

Under this title of Safir, there are products named Safir Intelligence, Safir Storage, Safir Cloud, Safir Big Data and Safir DevOps. Here is the world of Safir and its contributions to Turkish public institutions in a nutshell.

B3LAB, which also develops projects in the public sphere to take advantage of the capability of big data and AI in the ad hoc clustering, analyzing and interpreting of data, uses these capabilities to reduce the decision time stemming from the big data generated at the Central Bank of the Republic of Turkey (CBRT) from 3-4 hours to 18 seconds and to prevent speculative forecasting of inflation indices.

"We are in the process of preparing a project with TurkStat [the Turkish Statistical Institute] for the estimation of inflation indices such as the WPI [Wholesale Price Index] and CPI [Consumer Price Index] as well as the determination of indicators in determining these indices. Previously, we had a preliminary study with the CBRT on this subject. Taking advantage of machine learning and deep learning within the scope of this study, we will both forecast inflation and determine the most accurate indicator products that should be selected in the basket for the best inflation forecast using AI techniques," Mehmet Haklıdır, a chief expert and researcher at B3LAB, explained.

B3LAB Project Manager Merve Astekin explained how the central bank's reflection of big data in the decision process is reduced to seconds, saying: "The CBRT has a very large-scale data set with online price information collected from the markets. Data from these markets flows in live stream and is collected on a daily basis as data flows. The duration of their daily queries on this flowing and constantly growing data converges to three to four hours with the increase of the data. Three to four hours is a long duration to run decision-making processes on live data. This needs to be reduced to a very short time. We have decided together whether it would be appropriate to switch from their own infrastructure, i.e. the traditional solution, to the big data world, and in our study with them, we have shown that query times can be reduced to 18 seconds with the transition to the big data world. This study provided a great time gain for them. We are also carrying this environment to live through TurkStat."

Recalling the crash of the Boeing 737 Max belonging to Ethiopian Airlines in March and the software bug leading to the death of 157 people, Haklıdır said that the software used in both military and civil aircraft and machine learning within the scope of AI could not gain the confidence of the world so far. Underlining that AI will make sense of the data on aircraft more accurately, Haklıdır added: "Speaking about the Boeing 737 Max case, what happened was the fact that an autopilot was unable to detect the decisions he made because the pilot was not informed and that the pilot was unable to change them. It was caused by a sensor error. There is data received from a number of sensors in an aircraft and this data needs to be interpreted through fusion. The systems that do this now actually use past technologies of 20-30 years. You have the chance to render it with much better performance through machine learning. The drawback seen so far is that when you do it through machine learning, these models turn into a black box and not knowing how they make these decisions inside. We set out with the belief that the library we have developed here could later be turned into a more explainable version of AI when it could be used on an aircraft. In the next phase of the project, we expect the AI to verbally express the decision it makes there to the operator. Thus, if there is a problem due to sensor error, the pilot will be able to intervene. The pilot will be able to deactivate AI immediately."

"Models will be created by training the data to be collected in the aircraft at the station; these models will be placed on the aircraft, and the data flowing while the aircraft flies will constantly come to this model to produce an output. With the data received after each flight, it will be retrained and model learning will be targeted. This is the part that has not been done so far: There is no model placed on the aircraft. This is because there is no model that has developed avionics software standards yet. We will carry out a R&D study here."

One of the most important issues for Turkey in terms of its strategic position is the protection of data, especially national data. Therefore, B3LAB, in association with the National Electronic and Cryptology Research Institute and Cyber Security Institute, which are affiliates of TÜBİTAK BİLGEM, has developed an electronic file storage system "that has no equivalent in the world" in the widespread use of security and privacy. This system, called Safir Storage, is distinguished from its counterparts with its ability to store your files in the cloud after they are encrypted on your computer. The implementation, which was decided in the first 100-day Action Plan of the Presidential Cabinet to be made common in universities, has been designed to consolidate the data security infrastructure of Turkey's national institutions. Safir Storage has approximately 1,000 users in the Turkish Academic Network and Information Center (ULAKBİM) environment supporting the National Academic Network. It spreads to universities in phases and is being used by seven universities. It is planned to be also extended to the public sphere through a number of action plans in the future.

Furthermore, the Defense Industry Presidency and the Ministry of Treasury and Finance have set up the storage system in-house for trial purposes. This system, which can also be customized according to the needs of use and provide solutions to the different needs of the public sector, is planned to be enriched with machine learning and deep learning capabilities, to be integrated into all customs gates operating under the General Directorate of Customs Protection of the Ministry of Trade, and to be used in storing and making sense of X-ray scanning images of containers and trucks to cross the border. Safir Storage's established environment in TÜBİTAK BİLGEM usually offers the opportunity to test Safir Storage to the leading companies of the defense industry. Approximately 1,000 users benefit from the system in this environment.

When the data "does not need to be stored through encryption," Safir Storage provides the same level of secure file storage service as Google Drive, Dropbox and One Drive. Merve Astekin, Project Manager of TÜBİTAK BİLGEM B3LAB, stated that the Presidential Digital Transformation Office is working to spread it to the public sphere, sharing the following information about this electronic storage system that maximizes data security: "The key through which you encrypt in the commonly used cloud storage products is also available in the system administrator, so even if you send your file encrypted, it is also possible for the administrator in the cloud to access the document. The distributed key architecture of Safir Storage does not allow it, but only you have the entire key. Some of your key is in a cloud service and the rest is in a third-party trusted authority. In this way, when you encrypt the document, neither the system administrators nor the trusted authority can open the file on their own. In this way, we ensure that no one except you can access your encrypted shared files. However, in order to prevent data loss in forensic cases predetermined by institutions or when data needs to be recovered, we combine the components of the third-party authority and system administrator and create a mechanism with which the user key is recovered." 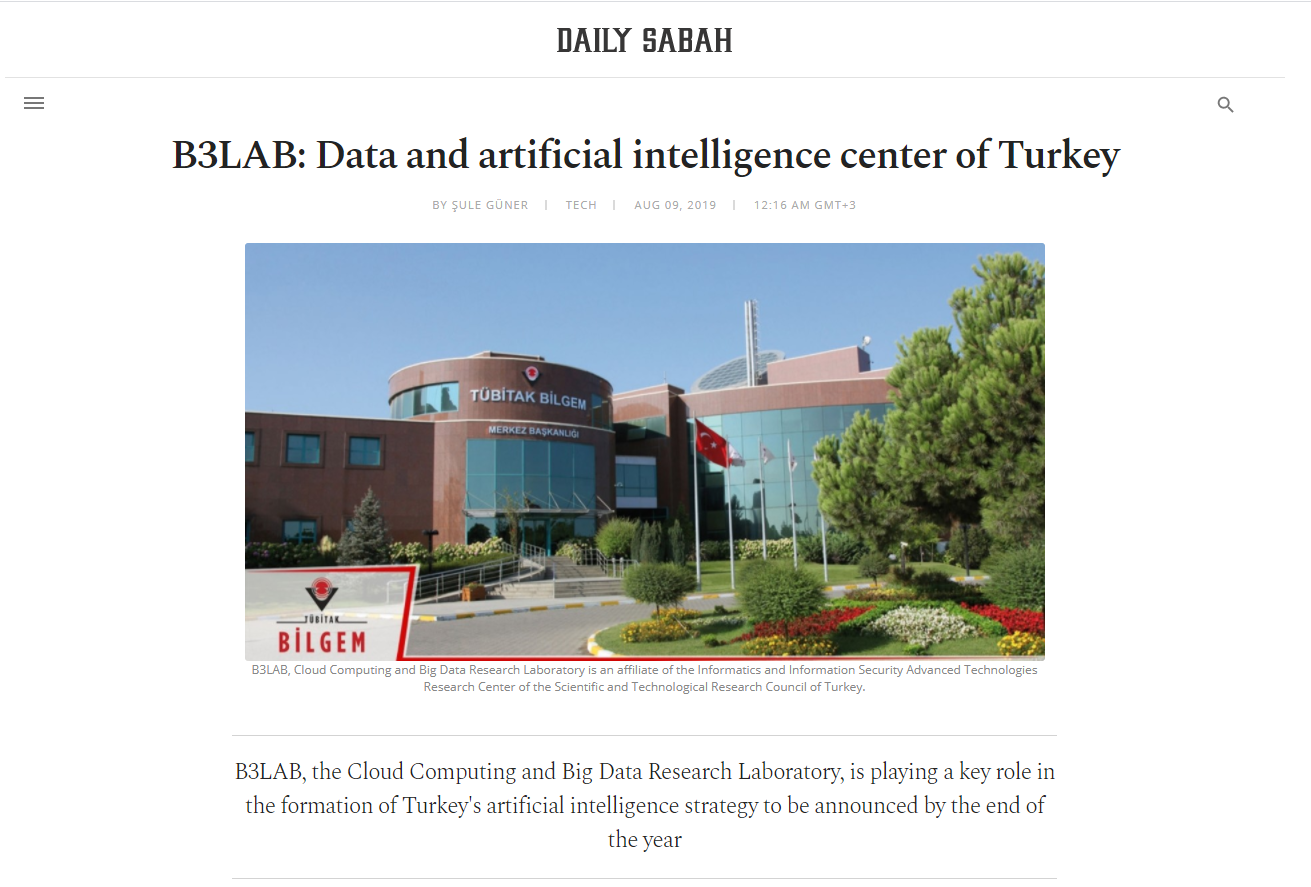